The Chronicles of Sherlock Holmes series 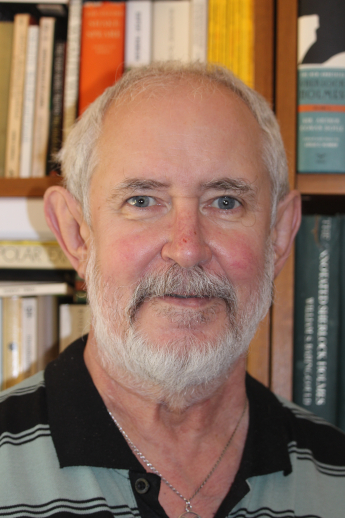 I was born in the Lake District of Cumbria, in the United Kingdom.
In 1969 my parents emigrated to Perth, Western Australia, taking
me and my two younger brothers with them. After two years in
High School I then studied Mathematics and Philosophy at the
University of W.A., it was there that I started dabbling with computers,
being involved in theatre and sound production, and met my wife Antoinette.
I am now a retired I.T. Professional (Operating Systems and Databases).
I'm multi-lingual (knowing English, French, German, and Spanish
- the latter three largely now forgotten), a polymath, a keen cook,
a painter, a gardener, a lexicographer (but not of the Times of
London calibre), and an avid traveler (having circumnavigated the globe,
visited Antarctica, and spent more than six months in Central and
South America. As a musician I am also an accomplished composer
and player (recorder, French horn, clarinet, organ, autoharp, and
I'm now teaching myself to play the electric guitar - a Strat), but
most recently my expertise is with a CD or MP3 player!

I live on a 2.1 hectare (a little more than 5 acres) property
in a rural region bordering onto the metropolitan area of Perth. Here
my wife Antoinette and I grow vegetables, tend an orchard of more than
two dozen fruit and nut trees, and we raise chickens for eggs.

Brilliantly coloured parrots (Redcaps and Ringnecks: a pestilence to the
fruit trees), rabbits (there are several warrens on the property) and
rabbit-sized marsupials (Quendas, perhaps better known by their
European given name of Bandicoot) visit us daily. In the southern
spring vibrantly irridescent blue wrens abound.

I make cheeses, fruit and grape wines, sausages, and paint when I am
not writing Sherlock Holmes stories on one of my three Linux computers.
The rich and famous company in Redmond has had nothing to do with
the creation of these stories: LibreOffice on LINUX was used.

I started writing in 2009 with the story of the "Scotched, Soused, and
Strung Scotsman" after being put under considerable pressure to write
a story by two old school friends, Christopher and David. The other David
has since published two short stories of Sherlock Holmes that are
humourous and very ex-canonical, whereas my collections are as
strictly canonical as can be (given that Conan Doyle made many serious
errors in his chronology) and that I have added elements of my own
to the history. When halfway through writing the 'Scotsman' story,
I created a 'chronology' to fit together all of the published Conan Doyle
tales. This includes a credible pseudo-history commencing in 1810
with the birth of Holmes's father, the lives of Holmes and Watson before
their fateful meeting in 1881, Watson's marriages, and through to (and
beyond) Holmes supposed 'retirement' in 1903. This 'history' has been
revised repeatedly over the years, it is included in Volume II - and has
been revised yet again (and again!) and the most recent version is
always available on this web-site.